That last pizza piece could leave you single!!

I love reading the posts on the New England Historical Society website. They are always interesting and registration is FREE!

This was an interesting account of New England superstitions relating to finding a spouse.

One of those included was this:

A version of this was still around when I went to college, which was that a girl who took the last piece of a pizza would end up an old maid. (Although it never stopped me from doing so.)

I don't know if I knew about this superstition because my family was from New England, or whether this was also current in the Midwest.

Does anyone ese remember this superstition? 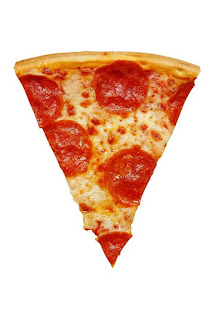 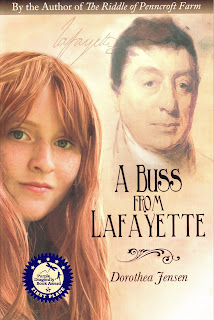 A great new review from a Readers' Favorite Reviewer!

". . .a charming coming-of-age novel. Jensen's admiration for Lafayette and other Revolutionary War heroes is reflected in the rich historical details and her meticulous research. Clara is a well-written and nuanced character. Her struggles are relatable and her relationships with the other characters are realistically written. This is a great read for any young history lover."

As clear as the Liberty Bell : ) 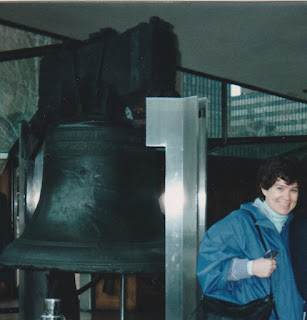 I just came across this picture of me with the Liberty Bell, taken in the early 1990s. When I saw it, it made me think of something a recent reviewer said about my rhyming biography, Liberty-Loving Lafayette: How "America's Favorite Fighting Frenchman" Helped Win Our Independence:
"It’s as clear as the Liberty Bell that Dorothea Jensen breathes the history of our colonial period, and her reverence for and joy in the subject will inspire anyone who opens her superb presentation." —Jon Michael Miller, Readers’ Favorite
Woo hoo!
Posted by Dorothea Jensen at 1/24/2022 10:48:00 AM No comments:

Another "Duh" Moment Regarding THE RIDDLE OF PENNCROFT FARM

Can you believe that it never occurred to me that settles were helpful in keeping people warm?????
Here's how:

"In sitting before an open fire it was often complained that while one was roasted in front he was frozen in the back and this led to the use in nearly every family of a long seat made of boards called a "settle," with a high back to keep off the wind from behind, which, when placed before the fire, was usually occupied by the older members of the family." 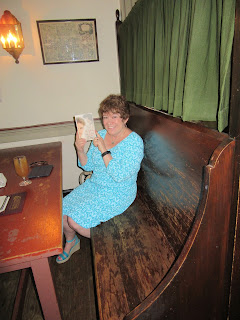 Here's how I used "settles" in The Riddle of Penncroft Farm, which I am holding as I sit in a settle in the picture above, taken at the City Tavern in Philadelphia.
I cleared and wiped the table, then swept the plank floor while Aunt Cass did the dishes. Then she picked up a sweater and put it on.
“Better wear your jacket,” she said. “Sandra put it in one of the settles last night.”
“Huh?” “The settles—those high-backed benches. The seats open up. That’s where I keep hats and mittens and things.”
I flipped open one of the wooden benches. My jacket was inside. “It looks like my coat is already settled in,” I punned.
“You’re a punster—good,” remarked Aunt Cass without a glimmer of a smile. “Always liked puns; never much good at making ’em up. Come on.” She pushed open the door and we went outside.
Jensen, Dorothea. The Riddle of Penncroft Farm (Great Episodes) (p. 23). Houghton Mifflin Harcourt. Kindle Edition.
Posted by Dorothea Jensen at 1/24/2022 10:35:00 AM No comments:

In October, we went to Newport, Rhode Island, for the dedication of markers for two Frenchmen who died there during the American Revolution. But that is not what I am writing about today.

The day after the ceremony, there was a gathering of Revolutionary War re-enactors. This featured the exact replica of George Washington's tent, which he used throughout the war. It was made completely by hand by the staff of the Museum of the American Revolution in Philadelphia, which owns and displays the orginal marquee. Obviously, no visitor is alllowed to touch or enter the original. The replica is quite the opposite: it was created so that people could go inside and get a sense of Washington's mobile headquarters and bedroom. And so we did! 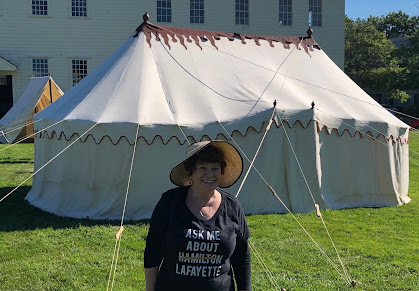 Here I am with the marquee behind me. The red bit on top is to protect against leaks. (The original has been lost, so you won't see it on the actual GW tent in the museum.) 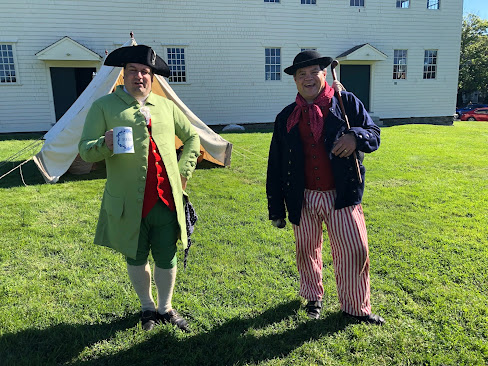 A couple of the re-enactors. I can't remember exactly who they are supposed to be, but I believe the green-coated gentleman is a Newport merchant, and the guy in the striped pants is a sailor. 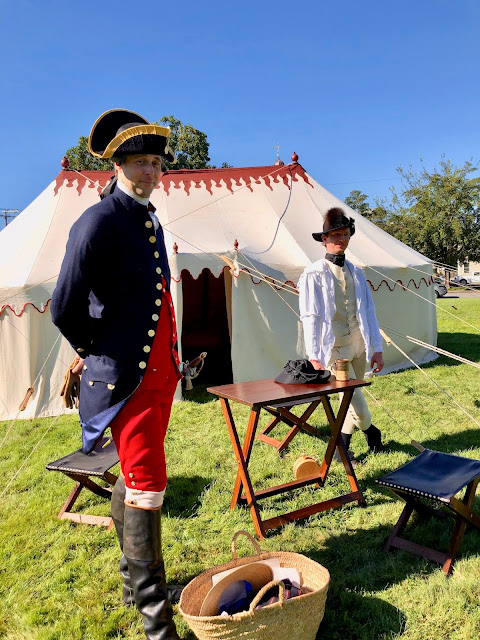 The tall re-enactor on the left was impersonating a French officer. As my husband is exactly the same height as Washington, it was easy to see that this guy would have towered over him.  (BTW I told him the story about Admiral de Grasse, who was about the same size as Washington, who was nearly always taller than everyone around him. When deGrasse met Washington, he addressed him as mon petit general,  which means "My Little General.")
On the right is Tyler Putman, Manager of Gallery Interpretation at the Museum of the American Revolution in Philadelphia. 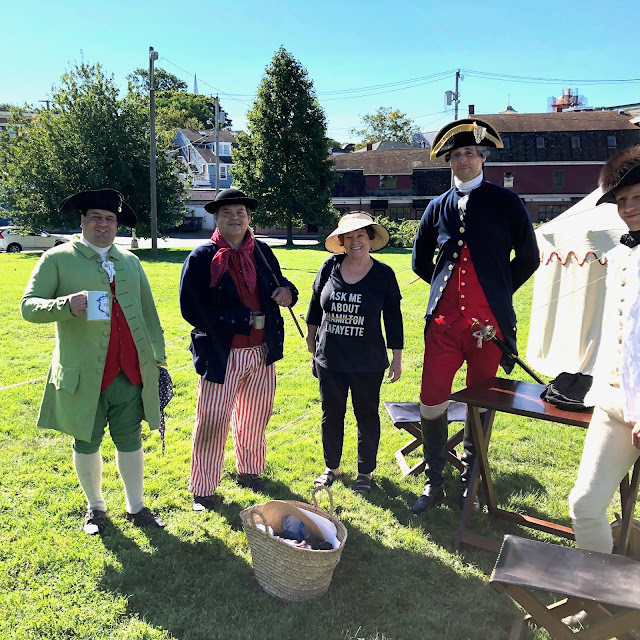 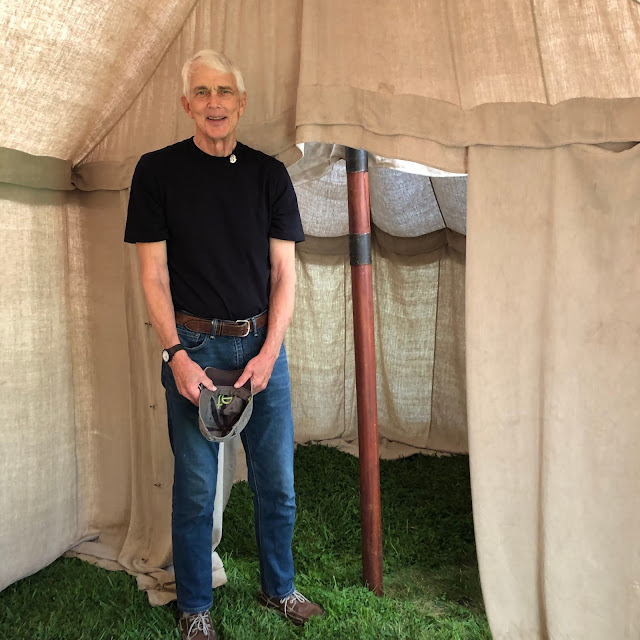 Here my husband is demonstrating how Washington fit inside his marquee. David is 6' 4", which is GW's purported height. As you can see,  either would have to duck to move from room to room inside. The small enclosure being him is the bedroom. (We arrived which they were just setting up: eventually a replica of Washington's camp bed was placed in this room.)

The main room of the tent was used as headquarters, and another smaller room on the end opposite the bedroom was used for storage. 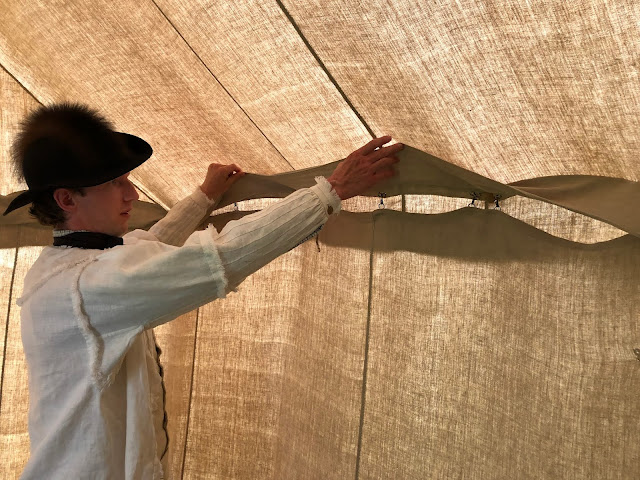 Here Tyler Putman is showing me that the shole tent is put together with hooks and eyes.  It must have been quite a challenge to hand stitch all of the "eyes!" 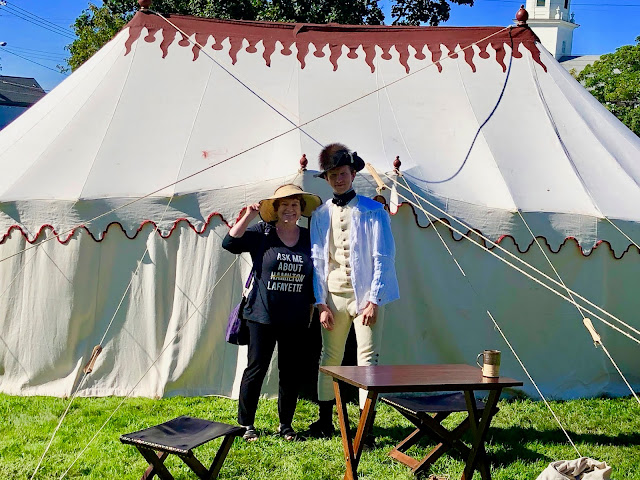 Here I am with Tyler standing at the front of the marquee.  After talking with him for quite a while inside the tent, I realized that he had been the host on a virtual tour of the museum for the American Friends of Lafayette, and also for a webinar done las January. As he had been bearded and bespectacled at both those events, I didn't recognize him until he told me his name!
All in all, replica or not it was great fun to visit the past!
My only  regret is that I can’t go back to 1989, when I finished writing THE RIDDLE OF PENNCROFT FARM. I would have changed the location of Geordie and Sandy’s meeting with Washington at Whitemarsh: they would most certainly have been in George Washington’s marquee! 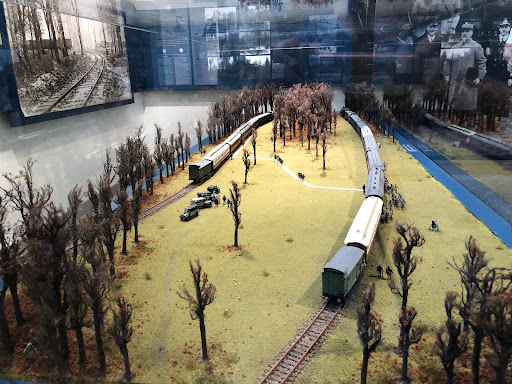 A couple of years ago we visited the site of the signing of the 1918 armistice that ended the fighting of WWI.  The final negotiations were carried out from two trains parked on adjacent tracks.

Here is a photograph taken at the time of the November 11, 1918 signing. 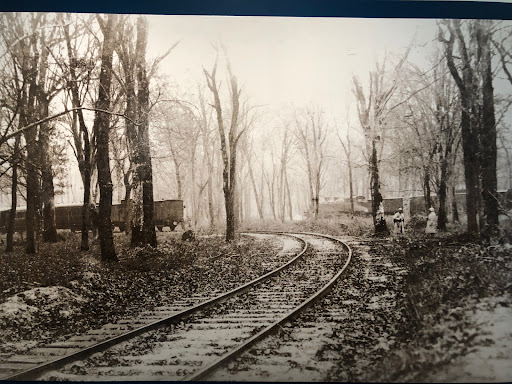 Here is a model of the parked trains from the museum at the Armistice site.

The actual signing of the Armistice was done on a railway car belonging to Marshal Foch, the leader of the French forces.

After Hitler invaded and defeated France in June, 1940, to add to the humialition of the French he insisted that the they sign their surrender in the same railroad car, situated in the same place, near Compiegne, France.

Here is the actual railroad car used for the WWI Armistice just before the French were compelled to meet with Hitler to sign their WWII surrender in June, 1940. 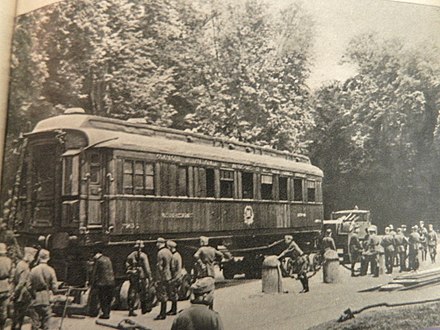 Afterwards, Hitler had the car taken to Berlin to be put on exhibit in triumph. It was later destroyed.An identical railroad car was eventually brought to Compiegne as a memorial to the WWI Armistice signed there.

Here is a picture I took looking into the identical car. at the Compiegne museum: 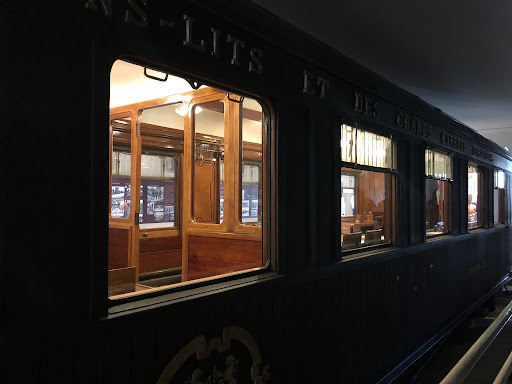 Here is a diagram of where the French, German, and English commanders sat during the WWI Armistice signing.

Our guide told us that after the French surrender, Hitler commanded that everything at the site commemorating the 1918 Armistice be obliterated, except for the statue of Marshal Foch. (See below.)

He wanted Foch to remain overlooking the devastation 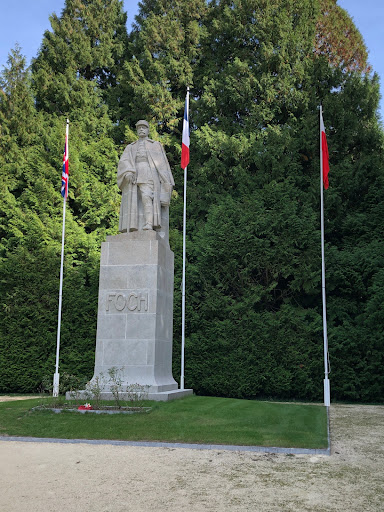 One of these things is not like the other!

My latest book, Liberty-Loving Lafayette, won the Bronze Medal in the Young Adult - Nonfiction category of the 2021 Readers' Favorite book awards today. I am thrilled to get this award, as a glance at the top five winners (below) shows that historical poetry is not what usually wins this category!

Thank you to the judges who realized that this playful little rhyming story for teens is actually NONFICTION! 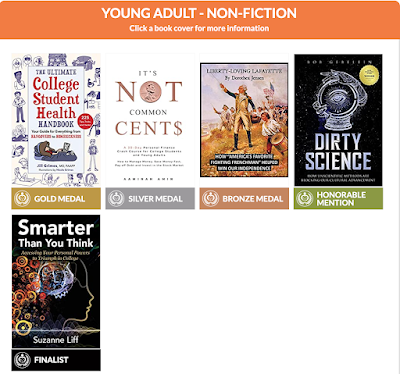 So here's my cover adorned with its new award! 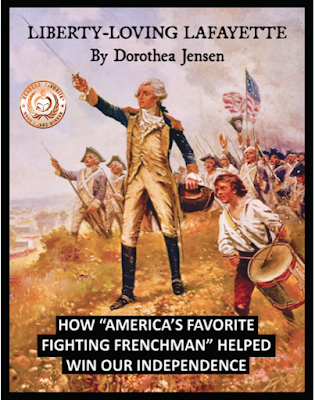