How often can an author mark history outside the pages of her book? 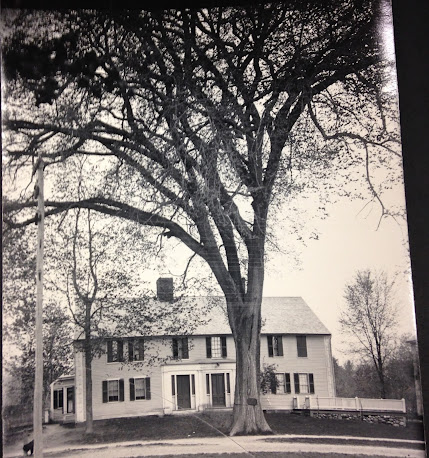 Wiggins Tavern, Hopkinton, New Hamphire
(Hopkinton Historical Society)
By the time I turned onto Main Street, I was so intent on reaching the doctor that I scarcely noticed the large crowd of people gathered underneath the enormous elm in front of the Wiggins Tavern.
—A Buss from Lafayette © 2016 by Dorothea Jensen
This is what I wrote in my historical novel for middle graders/young adults which was set during the 1824-5 Farewell Tour of Major General Lafayette, A Buss from Lafayette.
What was this crowd in my story waiting for? The arrival of Lafayette in Hopkinton Village. The date was June 27, 1825.
This really happened. It was the inspiration for my writing this novel in the first place.
Now I have helped make it possible for a beautiful new marker to be installed commemorating this event. This will be done by The Lafayette Trail, Inc., a 501 (C) 3 organization dedicated to marking the route Lafayette took on his unique Farewell Tour. (I'm a member of its board. Donations are always welcome at TheLafayetteTrail.org.) The signs are funded by the Pomeroy Foundation.
Lafayette visited all 24 of the United States during the 13 months of his visit, and traveled over 6000 miles. He was mobbed like a rock star everywhere he went. For example, here's a picture of what happened when he went to Philadelphia. 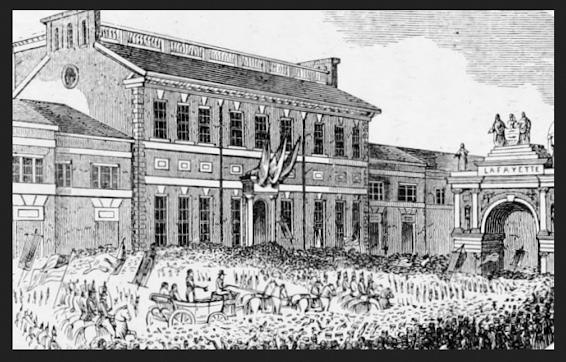 Of course, our Hopkinton Village crowd was modest in size compared to this, but I'm certain the excitement at meeting a world famous hero of the American Revolution was comparable to that of the Philly mob.
There is an old marker in the village, but it has the wrong date on it. 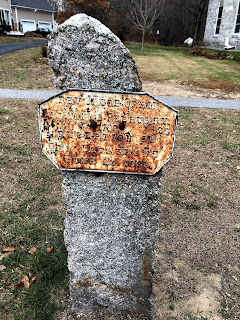 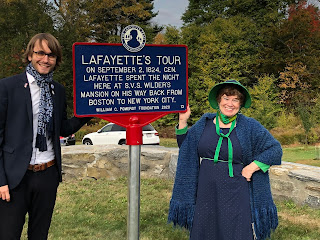 Bossy Boots of the World, Unite! 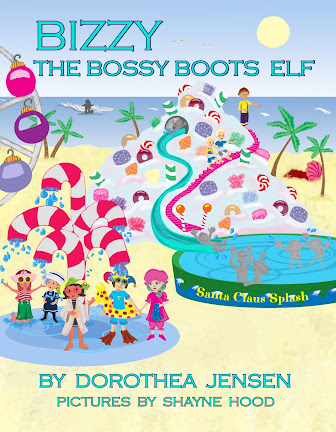 All right, people. I wrote this story for everyone out there who has ever been called "bossy."
Like me.
I was the oldest girl in my family, with one older brother and three younger sisters. And yes, I admit that when we were very young, I did occasionally take the lead and make pointed suggestions to my little sisters. After all, I was bigger than they were.
Not. Any, More.
Yes, there was that fateful day when my smallest sister suddenly looked up at me and said, "Wait! You're not my mom. I don't have to do anything you tell me to!"
It was all downhill after that. My career as a Bossy Boots was pretty much over.  However, as long as my mother lived, which was about fifty years longer, she would always tell people "Deedy [my nickname] is really, really bossy."
So this illustrated poem,  Bizzy, the Bossy Boots Elf, tells the story of Bizzy, who just might possibly have a tendency to be bossy. I hasten to add, however, that Santa Claus regards Bizzy as his "right hand man," so at least some of this was legitimate. But the Izzies don't think so.
So Bizzy is the spokesman for the rest of the elves in petitioning Santa for a vacation (because they were all so depressed), and he is the one who searches online until he finds the perfect holiday spot (as shown in picture below).

So I'm on Bizzy's side. Without him, those Izzies would still be stuck at the Pole!
Here is the buy link if you Bossy Boots out there would like to show your solidarity by reading this story. (It will be available at other stores soon.)
Amazon
Posted by Dorothea Jensen at 11/30/2020 01:17:00 PM No comments:

Well, in between cleaning out closets and drawers that hadn't been touched in 30 years, I finished writing two books. 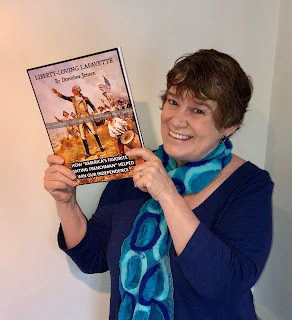 The first, which came out on Bastille Day (July 14) is a unique rhyming history inspired by the Broadway hit, Hamilton. Liberty-Loving Lafayette: How "America's Favorite Fighting Frenchman" Helped Win Our Independence takes less than half an hour to read (although it took a year and a half to write), explains what Lafayette did in our Revolutionary War in playful rhyming verse.

I like to say that it includes everything that "Guns and Ships" left out!.

I illustrated my book with classic pictures of people and events in the story that are in the public domain. Here's an example: 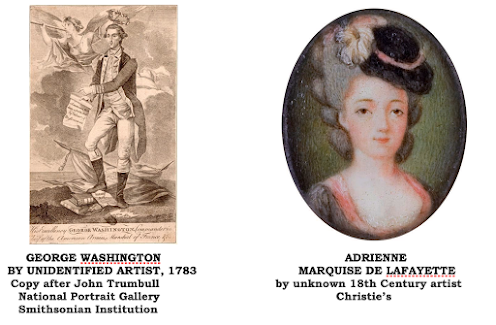 One early reader had this to say about this book:

". . .a perfect example of how a writer can make history/learning history fun. . .the accompanying art is wonderful"-David Bruce Smith, author of Abigail and John, founder of the Grateful American Foundation, and co-founder of the Grateful American Book Prize
I am happy to report that Libetty-Loving Lafayette has been on the Amazon best seller list (in its category: teen colonial and revolutionar war era) ever since it came out!  Woo hoo!
Here's how it starts:

So listen up, my children, and I'll do my best to tell
How a teenaged French aristocrat served all of us so well.1
Without his help, we might have lost our fight for Liberty,
And we’d still be lowly subjects of the British monarchy!

The second book, Bizzy, the Bossy Boots Elf  (which I actually started writing six years ago), came out last month. A rhyming poem modeled on "A Visit from St. Nicholas,"Bizzy is the 5th in my Santa's Izzy Elves Series. 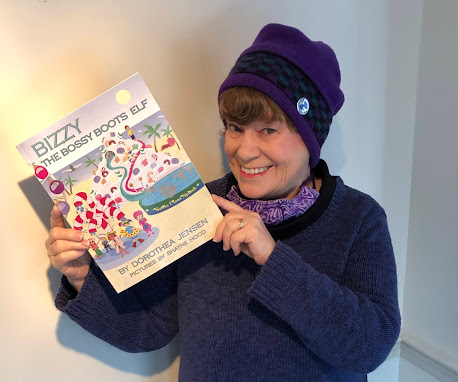 It was great fun working with my illustrator, Shayne Hood. These pictures were much more complicated that those in my previous elf stories. Many of the illustrations had all 8 Izzy Elves in them, and one actually had 16!

This paperback and Kindle book is currently only available from Amazon, although there will be more sources soon.

Whew. I guess I better get back to those closets and drawers!

Penncroft Farm: The Battle of Brandywine

On September 11,  to mark the 243rd anniversary of the Battle of Brandywine, I made videos of the part of The Riddle of Penncroft Farm which portrayed my main character Geordie's experiences in that major battle.

I liked everything about school, right down to the sound of the pencils scritching on our slate tablets. Most of all, however, I loved hearing the teacher read stories and fairy tales to us aloud. Even the m - ore youthful fare read aloud in the classroom seemed to transport me right out of Hopkinton and into more exciting times and places. Not all the stories the teachers read had been so enjoyable, however. One in particular, a sickening story named Goody Two Shoes, had a heroine so sweet and, yes, so extraordinarily good that she could give real girls the toothache faster than the hard peppermint candy in Mr. Towne’s glass jars.

Goody Two Shoes was probably just the sort of person my stepmother wished me to be: the kind of person my cousin Hetty pretended to be when adults were around. “Hetty is actually more ‘Goody Two-Faced,’” I murmured to no one in particular, turning my mind to the puzzle of why Hetty was so mean to me now.

-A Buss from Lafayette © 2016 by Dorothea Jensen

Yup, old Goody was sweet, all right. If you want to read the original story (it's very short), follow this link for two different versions. (I'm sure that Clara's teacher read the one published in 1820, btw.)   Goody Two Shoes

Goody Two Shoes was originally published in 1765. The author was anonymous, but was rumored to be Oliver Goldsmith. The title came to be used to signify someone who was a "goody goody" - the type of child who not only ALWAYS behaved the right way, but also tattled on those others who did not.

Goody Two Shoes was  re-published many times over the years. Usually the illustrations were re-done to reflect current clothing fashions. Here's what Margery Meanwell (AKA Goody Two Shoes) looked like at various times:

#1 and #2 in Amazon New Releases: Colonial and Rev History!

For a will there Liberty-Loving Lafayette was #1 in both this category and in Teen Poetry!

In order to stay sane during this pandemic, I've started taking another look at great reviews of my books. I figure that 1) this cheers me up and, 2) it isn't fattening.

Here is one of the first blurbs I received for A Buss from Lafayette, about five years ago. 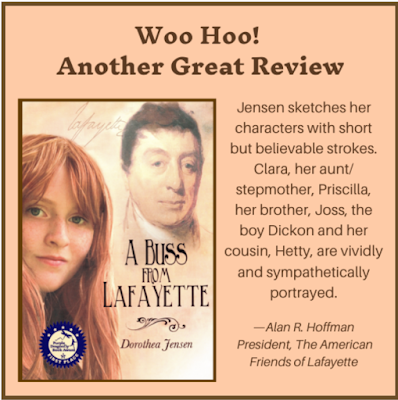