How much do YOU know about Lafayette??

Here's a fun little quiz I found on the internet. I'd like to say I scored 100% on it, but that would be lying.  (Although I only missed one.)

Help Honor Lafayette, the "Lancelot of the Revolutionary Set!" 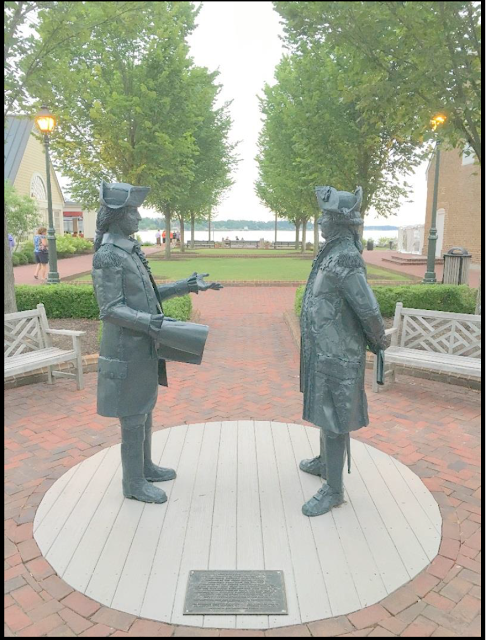 In historic Yorktown, Virginia, site of the final major battle of the Revolution, there is a duet of statues honoring General George Washington, commander of the combined American and French forces, and French Admiral François De Grasse, commander of the French fleet that "bottled up" the British troops under General Cornwallis at Yorktown. These life-sized figures were created by Virginia sculptor Cyd Player.

Installed in 2005 and enjoyed by tens of thousands of visitors annually, the statues commemorate two important meetings that took place on board De Grasse’s flagship the Ville de Paris to plan the 1781 Yorktown campaign and to explore plans for further operations.

The problem? It was supposed to be a quartet of sculptures. There are two important figures missing! Also present for at least one of these meetings were General Rochambeau, who led the French troops, and General Lafayette, who had kept Cornwallis trapped at Yorktown until the combined American and French troops had arrived. (He also served as an interpreter at the meeting with Washington, Rochambeau, and De Grasse.)

The reason that Lafayette and Rochambeau are not represented here? There was not enough funding to create all four statues at the same time.

Now the national organization dedicated to honoring the young Frenchman who did so much to help us gain our independence, the American Friends of Lafayette, is teaming up with the Celebrate Yorktown Committee of the Yorktown Foundation, and other interested organizations and people, in order to commission a statue of Lafayette. The new statue will accurately portray this important historical event and provide an opportunity for visitors of all ages to discover and recognize the role Lafayette played in shaping America’s history.

The goal is to get the statue finished in time to be dedicated on in October,  2017, at the annual celebration of the American victory at Yorktown.

To help make the Lafayette Statue a reality, either click here  to donate via PayPal or mail a check (made out to American Friends of Lafayette) to:

The AFL is a 501(c)(3) non-profit organization and contributions are eligible to be tax-deductible.

P.S.  Finally, you might want to become a member of the American Friends of Lafayette.
The cost to join is minimal, and it is great fun to get together every year to learn more about General Lafayette and other figures and events of the American Revolution. There is also a great publication, the "AFL Gazette", with information about Lafayette, sent out to all members several times a year.

I just got back from a vacation in which I stayed at a log lodge built in 1923.  This is what I found inside on the wall:

I checked all the details of this carriage:
It's a barouche like the one that transported Lafayette (and an anonymous Vermont Revolutionary War veteran whom everyone thought to be Lafayette) to New Hampshire in June, 1825.

In A Buss from Lafayette, here's how the veteran described that vehicle. 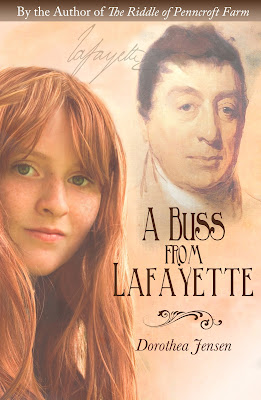 “Well, meanwhile, Mr. Parker and I discovered for ourselves that the barouche was just the right height for leaning over to shake hands and kiss children. Though we did not shake many hands or kiss many children, once Mr. Parker had cleared things up,” he added with a rueful grin. A Buss from Lafayette ©2016 by Dorothea Jensen

Writing with a Flourish!

Those of you who follow my social media might have noticed that I have used the "Flourish" above a number of times.  This was actually selected by the designer for the cover of A Buss from Lafayette. 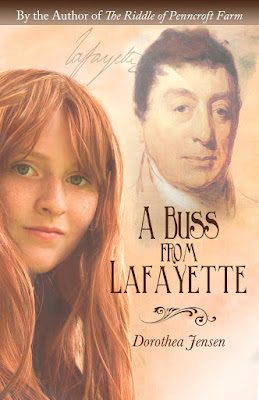 I liked it so much I asked to have it at the beginning of each chapter.

Lately I've been thinking about this flourish, and it occurred to me that it is a pretty good schematic showing how to write a novel.  You start out with a single story line (see pointy bit on the left side).  In Buss, this would be Clara's family situation and her difficult relationship with her stepmother.

Gradually you develop other bits of conflict for the main character. Here we have Clara's complicated relationships with her Cousin Hetty, Dickon, etc.

Then you start finding solutions for some of your character's problems. For example, Clara might make a breakthrough with Hetty and start to understand Dickon's feelings.

Finally, the major conflict is resolved. (You'l have to read the story to find out how!)


So there you have it: writing with a flourish!

Here I am chatting with host Kevin Avard on Gate City Chronicles about other books I have written and the one I have in progress, set during King Philip's War in 1675 Massachusetts.

Note: I misspoke about the percentage of English settlers killed in King Philip's War. It was actually "only"1.5%. The percent of native population killed was actually higher than I said. It was about 15%. (This figure that does not include the many who were sold into slavery and shipped to the Caribbean.) These were still much higher percentages than in other wars in our history.  (More about that later.)

If the video does not appear on your mobile device, please go here.