The Izzy Elves Feel My Pain!

The Izzies posted this today. It's nice to know they appreciate my efforts, even though they are all for naught!


So Deedy (Dorothea Jensen to you) showed us this new picture by Shayne, Our Illustrator. It was done for a special new project Deedy has been working on ALL YEAR, only to find that it was not acceptable by the distributing company (which starts with A).  We LOVE how Shayne put in the Mouse Hole, after Frizzy went to all that trouble to decorate its door for Christmas!

Of course, we are all SAD now because this project isn't going anywhere soon, but at least we know Deedy was TRYING to do something nice for us Izzies! Sigh. 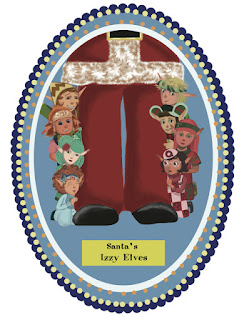 Re-posting a couple of pix to celebrate the season.  First, here are the Izzy Elves: 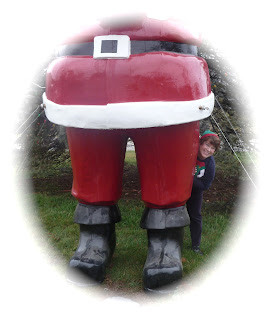 Another big sale on BUSS! 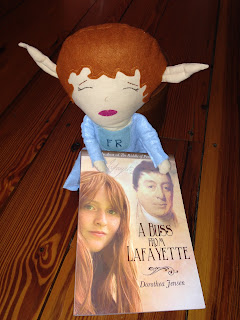 Deedy (Dorothea Jensen to you) says that Kobo is selling her Other Kind of Book (not ours) from now until January 5 for only $3.99. Here's the link!

This is all part of a Boxing Week Sale by Kobo.

We Izzy Elves have only two questions.

That's all for now. We're too busy to write much these days. 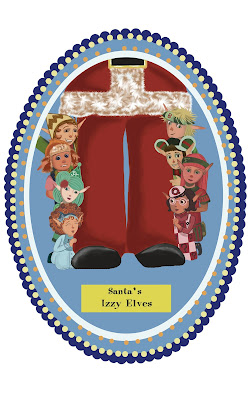 Last day for the big discount on BUSS is tomorrow!

My publisher is offering a huge discount until December 15 on my new historical novel for young A Buss from Lafayette. Instead of the regular price, $16.95, the sale price will be $9.95! If you have a middle school student on your holiday shopping list, this would make an excellent entertaining (and educational) gift!

NOTE: The default payment method on this online store is PayPal, but on the checkout page, there is a link that allows you to pay by credit card. Click on that link and you'll be taken to the credit card option.
readers,
Posted by Dorothea Jensen at 12/14/2016 01:47:00 PM No comments:

Big News that Rhymes with Circus!

Last night I found out that the Indie editors at Kirkus Reviews selected a review of A Buss from Lafayette to be one of the independently published books featured in the December print and online edition of their magazine. (Up to now, this review was only published on their website.) Apparently, Kirkus selects less than 10% of its Indie reviews for publication in the magazine. so it is quite an honor to be included.

They sent me a link to the e-edition, and I found the Buss review in the Indie section on page 203. Woo hoo!

Just for fun, I am posting a screen shot of the magazine cover below. 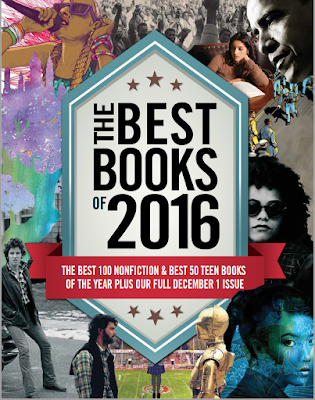 
Of course, I know that the cover headline doesn't actually refer to A Buss from Lafayette in particular, but I do believe that my book is in EXCELLENT company!

Here is the review:

In Jensen’s (Frizzy, the S.A.D. Elf, 2014, etc.) middle-grade novel, a young girl in New Hampshire meets the titular, illustrious French hero of the American Revolution during his commemorative trip through America.

Clara Hargraves turns 14 on the first day of summer in 1825—a date that coincides with the one-year anniversary of her father’s marriage to Clara’s straight-laced aunt, Priscilla, which occurred only one week after Clara’s mother died. The stepdaughter and stepmother don’t get along; Priscilla considers Clara a “hopeless hoyden” for her tomboyish ways,while Clara stubbornly refuses to call Priscilla “Mama,” as her father urges her to do. Between her clashes with Priscilla, red-haired Clara chafes at the teasing of her brother Joss’ friend Dickon Weeks and her “dread cousin” Hetty—they call her “carroty pate” and “pumpkin head.” As Clara is preoccupied with her own small problems, the whole country is aflutter over “The Nation’s Guest,” the Marquis de Lafayette, who’s touring the United States to mark the 50th anniversary of the revolution; everywhere she goes, people are eager to relate tales of Lafayette’s noble deeds during the war, show off souvenirs, or share their delight in getting a wave or a buss (“a playful, smacking kiss”) on the cheek from the marquis. Her brief encounter with him will forever change how she views herself. Overall, this novel is well-researched; for example, Clara saves her pennies to buy a Simeon’s lead comb from a local store—a real-life product that promised to turn red hair “a beautiful shade of black.” Some other aspects of Jensen’s novel are predictable, however: Clara is a fairly standard spunky heroine, and her rapprochement with Priscilla is a foregone conclusion. But Jensen still manages to deliver a lot of historical facts without dull exposition—it’s perfectly plausible, for instance, that the adults in Clara’s life would tell her stories about Lafayette’s exploits, and her curiosity becomes infectious. Jensen also includes a glossary and bibliography for further reading.

A winning historical tale that may appeal to young fans of the musical Hamilton.  - Kirkus Reviews

Wearing my other "writer's hat" - the pointy one. 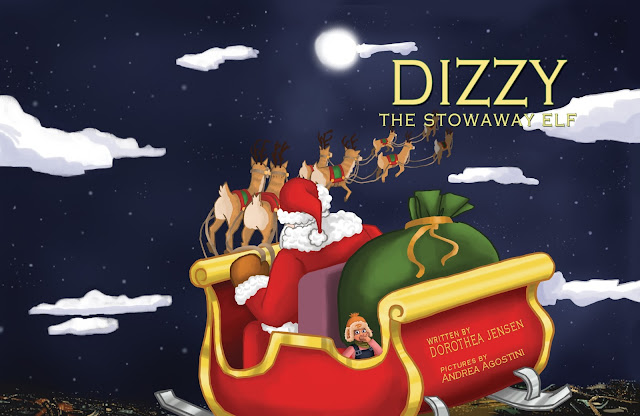 OK, I couldn't resist doing this! Yesterday I read my illustrated Christmas poem, Dizzy, the Stowaway Elf,  to children at Hopkinton Town Library. It was great fun, all organized by my Trusted Sidekick, Sienna Larson.  First the kids all made elf hats, did an elf hunt for the Izzy Elves, and paraded through the library, and then I read the story. (For sale here, by the way.)

Meanwhile I spotted this sleigh on exhibit. It reminded me so much of the sleigh that Dizzy stowed away on that I felt COMPELLED to take a seat.

After the librarian gave me special permission to do so, (despite the DO NOT CLIMB ON THIS EXHIBIT sign) I climbed aboard and brought Frizzy along for the ride.

Luckily, neither Frizzy nor I felt any "vile vertigo" like that naughty Dizzy did! 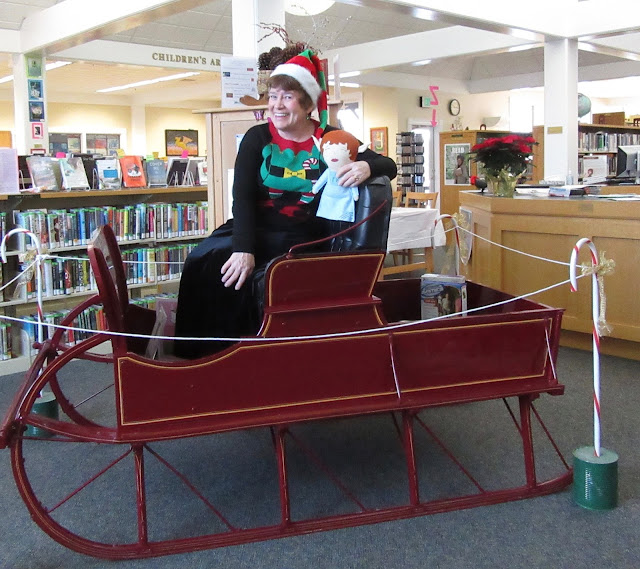 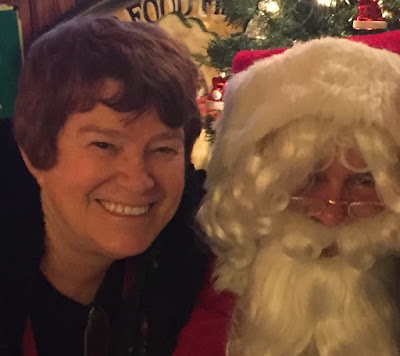 Deedy conferred with our boss late last night.
To rev up her brain so she's ready to write.
(Of course, we elves help her to know what to say
In our "counting down" verses until Christmas day.)
Posted by Dorothea Jensen at 12/02/2016 07:19:00 AM No comments:

Now the Izzy Elves are muscling in on MY blog!

So the Izzy Elves have started posting their Advent Calendar Christmas Couplets and insisting I put them on my blog, too. Here's the first one: 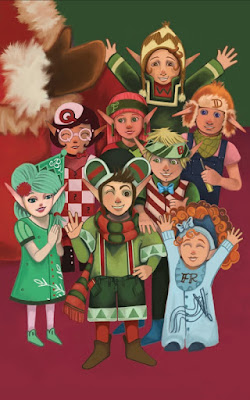 We Izzies are in an advanced state of shock
The calendar tells us (and so does the clock)
That Christmas is coming: we'd better get busy
To do all the tasks S. C. asks of Elves Izzy.