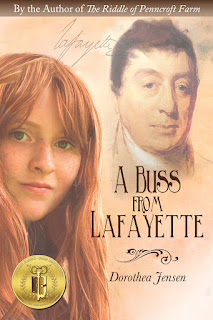 As faithful readers of this blog know, the young French major general, the Marquis de Lafayette, played a huge role in the American Revolution. This was particularly true at Yorktown, Virginia, the location of the final major battle of the war. It was Lafayette and his men who actually trapped the English, led by General Cornwallis, on the Yorktown peninsula. The timely arrival of a French fleet under Admiral De Grasse put the cork in the bottle. Between the two leaders, they were able to keep him there until Washington and the French general, Rochambeau arrived to besiege and attack the town.

For ten years or so, sculptures of Washington and  De Grasse conferring have stood near the Yorktown waterfront, commemorating one of the meetings they had. Lafayette and Rochambeau were participants at least one of these meeting. Sadly, however, the project ran out of money after sculptor Sid Player finished the first two figures.

The American Friends of Lafayette (a terrific organization of which I am a life member), discussed the possibility of commissioning a statue of Lafayette to put in its rightful place with Washington and De Grasse in Yorktown, to be done at some point in the future.

I am proud to tell you that my husband and I decided to start the ball rolling right away with a fat donation the very next day. By the end of that day, five other people matched our amount, and the fundraising took off. After six months of tremendous work by the people on the statue committee, enough funds were raised to commission Lafayette's statue to be created by Sid, the woman who had sculpted Washington and De Grasse.

Here I am standing in for the missing Lafayette one year ago. 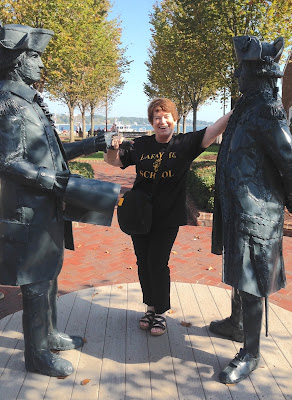 On October 18, 2017, the statue of Lafayette was unveiled!
Here's the before: 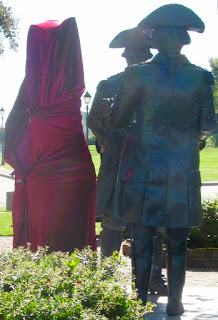 Here is a profile view after the statue was revealed, the guy on the left is Our Marquis! 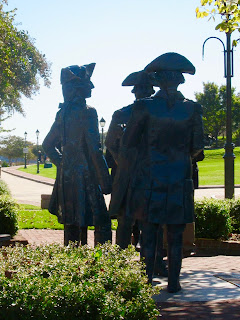 Here I am with the trio of famous heroes! 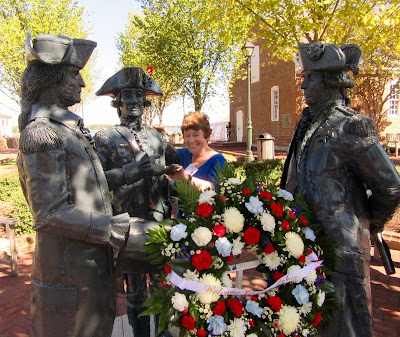 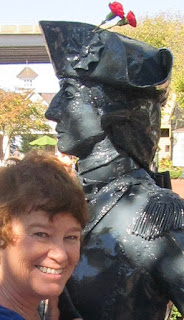 I tried my best to give a "buss" to Lafayette. However, because he is made of metal, he couldn't bend down, and because I am not quite of his stature, I couldn't reach up. However, please consider Lafayette well-bussed!