Well, I can't speak for all writers, but I will say that the way I became a writer was by reading when I was a kid. All the time. Under bed covers. In closets. (It was very noisy at our house with five kids, and lots of instruments being played.) And once in awhile, if it was relatively quiet, I even read in the living room, as I am doing here.

I think I was in the third grade in this picture.  I can only tell that because of the giant Raggedy Andy doll that is sharing the chair with me. I remember holding him on my lap when I read a poem ("There are Fairies in the Bottom of my Garden") to open our third grade production of a play about Raggedy Ann and Andy.  I don't know why they asked me to read that: it had nothing to do with R. Ann and Andy. But I sat out in front of the curtain on stage and read it. I think I ignored the audience and pretended I was just reading to R. Andy.

I have no idea why there is a yardstick poking out from the chair.

Since I have posted several examples of my past writing, I decided to include a piece I wrote about meeting Robin Williams.  I wrote this right after he died, and it was published in several print newspapers and on a number of online sites.

I think that the first anniversary of his death occurred recently, so I thought I'd post it on here in his memory.


I was saddened to hear today of the suicide of Robin Williams. He was a gifted comedian and actor, and also, as my own experience showed me, a very sweet and thoughtful man.

A number of years ago, my husband and I were in Los Angeles, visiting our son, Adam (who goes by his middle name, Hawk, in his film and television profession). Adam asked if we wanted to go see a Robin Williams comedy performance at a large theater in L.A. He said he could get us V.I.P. tickets through a friend of a friend. We, of course, accepted.

It turned out that this performance was one of the first that Robin Williams did after a long hiatus from live comedy, and after he had managed to conquer (temporarily as it turned out) a drug addiction. It was thus a bit of a test run for him, and the beginning of a national tour, to see if he still had what it took to amuse a huge, diverse, live audience.

Of course, some of what he said was what we used to call “blue”. I noted that one of Adam’s friends, who was sitting next to me, kept glancing uneasily at me as if afraid I was offended by what I was hearing. I patted his knee and said, in between helpless laughter, “Don’t worry, I grew up in the 60s. This is nothing I haven’t heard before.”

Although, of course, there was actually plenty I hadn’t heard before. Not exactly in that way. No one could riff like Robin Williams and he was in wonderful form that night.

When the performance was over, Adam said our V.I.P. tickets entitled us to go backstage to meet Robin Williams.  We rushed to do this, and found ourselves in a room that was jammed with other people who also had V.I.P. tickets, apparently.

I looked around curiously at the crowd: it was composed of “beautiful people”, all well dressed in the requisite ”hip” L.A. black clothing, and many well-botoxed. I think there were a number of celebrities in the herd, but I didn’t recognize anyone. I figured that our chances of actually meeting Robin Williams were quite low, given the density and “celebrity” of the crowd in the room.

After awhile, I saw the comedian come in, and there was a buzz as people jostled around him for their V.I.P. close encounter.  Again, I despaired that we would be able to speak with him. Soon, however, Robin Williams started walking through the crowd in our direction and stopped nearby.

I gathered my courage and said “Mr. Williams, you were so wonderful out there tonight. I especially liked your description of boys circling your teenaged daughter like tomcats, which  really rang a bell with us.”

But before I could say anything else, someone tapped Robin Williams on the shoulder. It was the manager of a second or third tier celebrity brother of a first tier celebrity who wanted to talk to him.  Williams sighed, and apologized to me. Since I was in no tier at all, I accepted that my fleeting moment with him was at an end and watched him walk off through the crowd.

I solaced myself with a glass of the champagne provided for us V.I.P.s, and chatted with my husband and son for ten minutes or so.

Then someone tapped me on the shoulder.

It was Robin Williams. “I’m sorry we were interrupted,” he said. “Please go on with what you were saying.”

I was truly astonished, but recovered enough to chat with him for awhile about the challenges of raising teenaged daughters. Finally, I thanked him sincerely for coming back to find me.

After he moved on, I thought about what he had done. It was probably quite simple for him to find me. I was the “sore thumb” in that crowd: my clothes were anything but black, and my face anything but Botoxed. I’m sure it was clear that I was a V.I.P in ticket only. But Robin Williams came to find me again anyway.

He was a real gentleman whose quicksilver talent and personal grace will be missed. May he rest in peace. 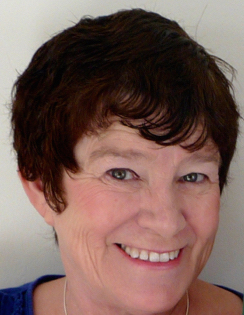 He looked at me.

I guess that makes me a Five Century Writer!

A Wonderful Lafayette Exhibit in Boston! 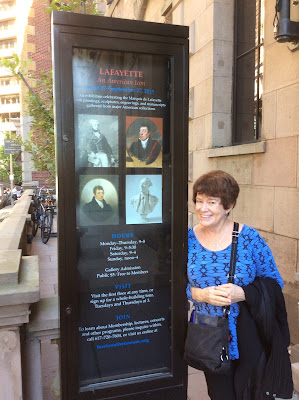 Last week I had the great pleasure of touring the special collection of Lafayette pictures, sculptures, etc. at the Boston Atheneum.  This was put together in honor of the visit of L’Hermione, an exact reconstruction of the ship that carried General Lafayette to America in 1780.  At the time Lafayette was carrying the news that France was sending troops and ships to help America in its struggle with Britain. (Please see my June post about watching L'Hermione land in Yorktown, Virginia, after crossing the Atlantic.) The original L'Hermione actually landed in Boston within walking distance of where I am standing.

Anyway, this tour was done under the auspices of the American Friends of Lafayette.  It was a delight to view these pictures and sculptures, most of which I have seen many times in books and on my computer screen.  They are so much more vivid and moving "in person"! (Especially the "life mask" which clearly shows the exact features of Lafyette's face.)

I have read a lot about Lafayette over the last years, in preparation for writing my novel for middle graders/young adults, A Buss from Lafayette.  It was wonderful to see him looking out from the walls of the Atheneum, portrayed in so many stages of his amazing life!

A BUSS FROM LAFAYETTE Trailer! 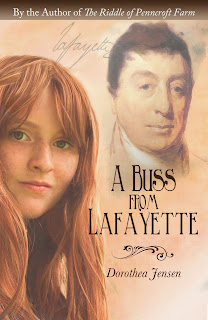 Woo hoo # 2!  Here is the first "trailer" for my new novel for young readers, A Buss from Lafayette.

Finally! A Trailer for THE RIDDLE OF PENNCROFT FARM! 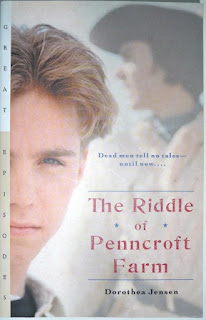 Woo hoo!  After more than 25 years in print, here is a new trailer for my classic historical novel for young readers about the American Revolution, The Riddle of Penncroft Farm.  This was an excellent opportunity to share some of the pictures that were used to illustrate an excerpt published in a school anthology, as well as some of the cover art created for the first hardcover edition of the novel. All are by artist Gary Lippincott, who grew up very, very close to where the story actually takes place.


Trailer: The Riddle of Penncroft Farm

This blog will only be distantly related to my writing.  It is more of a WHINE, really.  Here we go:

Last year I bought a new Mac desktop computer.  At the Apple store, I was waited on by one of their young "Genius" types.

I couldn't decide what capacity hard drive I should buy, so I explained to the sales Genius what I needed this computer for: writing novels and poetry, editing videos, and so forth.

I told him I thought I needed the largest capacity drive.

I am certain he looked at me and saw someone far too old to be computer-savvy. If he saw me at all.

"That would be like driving a Maserati to the grocery store," he said in what I believe would best be called a condescending manner.

I am an faithful Apple buyer.  I have been using Macs since the 1980s. Before this kid was born, I am sure.

But there is something about technology that can be daunting. Especially for us Baby Boomers. Female Baby Boomers in particular.

So I believed the "expert" and bought the smaller capacity computer.

Today this computer told me that it is completely full.

That means I am going to have to spend valuable time pruning files from it.

I am annoyed that I didn't trust my own instincts and I went with the whippersnapper's opinion instead.

Something about this reminded me of an experience I had when I was in my forties. I remember going to a grocery store (NOT in a Maserati) one day, my kids in tow. For some reason, when I was checking out it suddenly occurred to me that the young man who was working the cash register and the young man who was bagging my groceries treated me as if I were invisible. No big deal (rather amusing, really) but I did take note of the fact that as a woman accumulates years, she loses visibility.  Sort of like gradually donning that invisibility cloak in The The Twelve Dancing Princesses.

That very night, I played Phoebe Merrill in the Gilbert and Sullivan operetta, "The Yeomen of the Guard". I wore stage makeup, false eyelashes, a wig, and a fairly low cut costume. At one point, when I was not required on stage, I was thirsty and slipped into the hallway during the performance.

It was quite obvious that I was visible to him.

Or at least my makeup, false eyelashes, wig and low cut costume were.

Which is what I should probably wear next time I buy a computer. 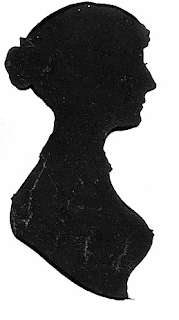 When I write historical fiction for young readers, I have no problem writing dialogue that would sound authentic in a previous century.

One reason I am able to do this is because I have been an avid fan of Jane Austen novels for many years.  I have read them so many times, I think I have internalized some of her style and vocabulary.

It was on a tour of Jane Austen sites in England that I met Rita, who passed along to me the buss (kiss) her great-grandmother received from Lafayette in 1825. That is what led me to write my new historical novel, A Buss from Lafayette.

For that tour, my mother and I put together a quiz for our fellow travelers by recording many of the songs that have been used in film and television productions of Jane Austen's novels. We asked everyone to name the production each song was from.

I don't think we stumped anyone!