Humpty, Dumpty, and Oxen in General


When I got to the barn, I greeted Humpty and Dumpty, the two oxen who pulled the plow in the springtime, the wagon at harvest time, and the sledge in the winter. Too bad I cannot ride an ox, I thought. I doubt anyone could put a sidesaddle on Humpty or Dumpty. I patted the noses of the large, gentle, brown beasts and fed each of them a handful of fresh hay before moving on to Feather’s stall.

A Buss from Lafayette © 2016 by Dorothea Jensen

Here is a team of oxen pulling a cart at Old Sturbridge Village. When I was there recently, I asked one of the costumed interpreters there what an ox is, exactly.  He told me that it is a steer (castrated bull) that has been trained to pull ploughs, carts, wagons, etc., that is at least 4 years old. Before reaching this age, it is simply regarded as a trained steer.

As you can see by this video I took at OSV, oxen are NOT built for speed, but are very strong! 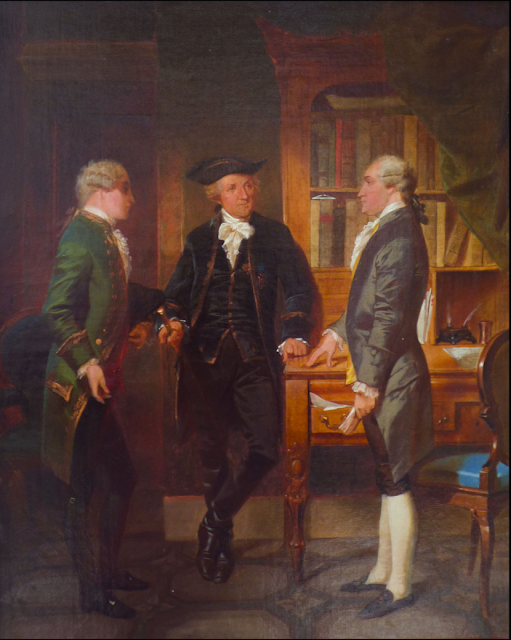 A wonderful artwork exhibit at the new Museum of the American Revolution in Philadelphia, PA.

In this 1857 painting by American artist Alonzo Chappel (1828-1887), entitled "Baron DeKalb introducing Lafayette to Silas Deane," the German-born officer Johann de Kalb introduces American diplomat Silas Deane to the youthful Marquis de Lafayette in Paris in 1776. The Continental Congress had sent Deane as a secret agent to France in order to seek financial and military assistance against the British. Deane enlisted the services of a number of foreign officers, including De Kalb and Lafayette, who arrived in Philadelphia in 1777 to take up positions in the Continental Army.

Silas Deane made so many promises of high military rank  to European officers that Congress and Washington got sick of dealing with these claimants. Neither really welcomed Lafayette with much enthusiasm  until a letter came from Dean and Franklin explaining the importance of Lafayette's position. and cautioning against letting the young Frenchman get in harm's way.

Here is a bit more of my rhyming couplet history explaining what happened.


He met with Agent Silas Deane, and was delighted when
Dean gave him a commission as a Yankee Major Gen.
. . .
When he arrived in Philly, though, despite his famous charms
Nobody welcomed him with even slightly open arms.
“Oh, not another foreigner, we have more than our share
And such a young and raw recruit we simply cannot bear!
The gall of Mr. Silas Deane: gun-buying is his task,
But he gives lofty ranks galore to all of those who ask!”
Then just in time a letter came from far across the sea
From Deane himself and Franklin, who were stationed in "Paree."
"He is both rich and famous, this Marquis de Lafayette.
His friends are French aristocrats, and Queen M. Antoinette.
So give him a high rank and let him bask in glory's glow
But keep him safe, for heaven's sake (and never let him know).
A dead marquis won't help us gain much-needed French support
But this boy's service in our cause will wow King Louis' court!"
So they made him major general for these diplomatic ends
And he and General Washington became the best of friends.
Posted by Dorothea Jensen at 1/20/2019 07:37:00 AM No comments: