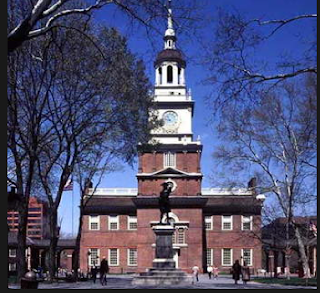 “The only things outnumbering redcoats are black flies,” I muttered to myself as I came to the
Pennsylvania State House. I peered up at the soaring tower to see the great bell that had been
rung to summon folk to hear the Declaration of Independence.
The tower was empty. Mystified, my eyes fell to the second-story windows that fronted the
Long Gallery—site of elegant state dinners. But Congress had long since fled the city, and no
elegant diners peered down from the Long Gallery today. Instead, I spied a crowd of gaunt,
ragged men, eyes huge in their skeletal faces.

- The Riddle of Penncroft Farm ©1989 by Dorothea Jensen

What is now known as Independence Hall was originally the Pennsylvania State House. Building was begun in 1832 but was not finished until 1853. It was here that the Continental Congress met and the Declaration of Independence was adopted. (It was also here that the Consitution was debated and signed in 1787.)

The British forces used it to house American prisoners of war during their occupation of Philadelphia during the winter of 1777-8. What better way to show contempt for the momentous events that happened within its walls?