I had the distinct pleasure recently of chatting at my 50th college reunion with a new friend, Mary Weshinskey, the wife of one of my classmates. I was telling her about my book, A Buss from Lafayette, and she said "I'm actually descended from one of the guys who came over to America with Lafayette."

Of course, I asked who this was, and she replied, "the Baron de Kalb."

How thrilling was that!

She said that his line had ended up with just female descendants, so his name had pretty much died out.

We had great fun establishing a "Friends of the Baron de Kalb" club consisting of the two of us.

Anyway this inspired me to look the Baron up and remind myself who he was and what he did for America.


This Bavarian officer did, indeed, come over on Lafayette's ship, the Victoire, in 1777 in company with the young (19!) marquis.  At first, he was unable to secure an appointment as an officer with the American forces, but Lafayette quickly interceded and he was given the rank major general. He was apparently a very capable soldier and officer, and was disappointed when later, at the battle of Camden, the so-called "hero of Saratoga", General Gates, was given the command. Gate deserted his men in the thick of the battle and galloped away. Or that is the traditional account, anyway.

De Kalb was wounded numerous times at that battle, and despite being treated by British General Cornwallis' personal doctor, died of those wounds. He is buried in Camden. George Washington visiting his grave years later, is reported to have said, "So, there lies the brave de Kalb. The generous stranger, who came from a distant land to fight our battles and to water with his blood the tree of liberty. Would to God he had lived to share its fruits!"

Meanwhile, I found the following letter written by de Kalb which gives an "unbiased" first person view of my hero, Lafayette: 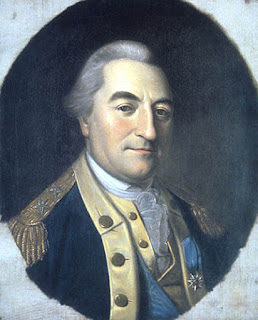 On the whole, I have annoyances to bear, of which you can hardly form a conception. One of them is the mutual jealousy of almost all the French officers, particularly against those of higher rank than the rest. These people think of nothing but their incessant intrigues and backbitings. They hate each other like the bitterest enemies, and endeavor to injure each other wherever an opportunity offers. I have given up their society, and very seldom see them. La Fayette is the sole exception; I always meet him with the same cordiality and the same pleasure. He is an excellent young man, and we are good friends... La Fayette is much liked, he is on the best of terms with Washington.