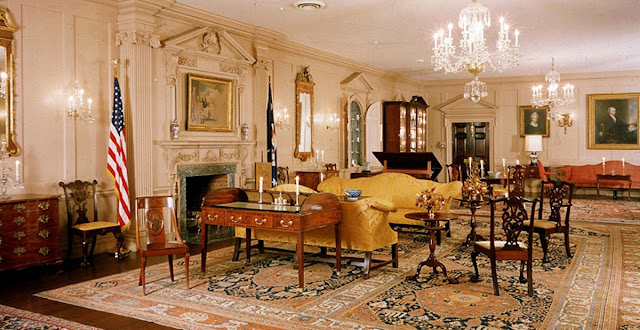 When our son was sworn in as a member of the diplomatic corps in 1999, my husband and I attended the ceremony at the Main State Department in Washington, D.C. Afterwards, there was a gathering on the top floor in the John Quincy Adams Reception Room, pictured above.

I believe that we were served glasses of champagne, and I remember casually leaning against the desk just to the left of the  center of this photo to sip from my glass. It was only after I had taken a few sips that I looked down. To my astonishment, I saw what was displayed on this desk: the actual Treaty of Paris, signed by Benjamin Franklin, John Adams, and John Jay on September 3, 1783,  to end our Revolutionary War. I had had no idea that it was kept here, and it was thrilling to see these signatures and know that this document marked the official separation from England, and therefore, the birth of our nation 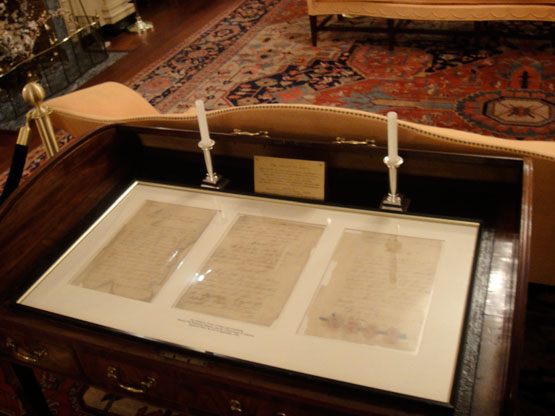 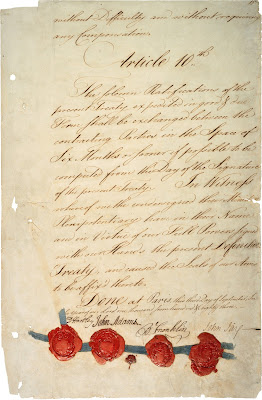 Article 10th:
The solemn Ratifications of the present Treaty expedited in good & due Form shall be exchanged between the contracting Parties in the Space of Six Months or sooner if possible to be computed from the Day of the Signature of the present Treaty.  In witness whereof we the undersigned their Ministers Plenipotentiary have in their Name and in Virtue of our Full Powers, signed with our Hands the present Definitive Treaty, and caused the Seals of our Arms to be affixed thereto.
Done at Paris, this third day of September in the year of our Lord, one thousand seven hundred and eighty-three.
D HARTLEY (SEAL)
JOHN ADAMS (SEAL)
B FRANKLIN (SEAL)
JOHN JAY (SEAL)


To read the whole Treaty, go to:
https://www.ourdocuments.gov/doc.php?flash=true&doc=6&page=transcript


I later learned that there were actually three original copies of this treaty that were all signed by the official signatories. The other two are at the National Archives.

Anyway, to go back to my moment of stunned realization about this historic document, I looked around and on a nearby wall, over the mantel, I found the famous painting by Benjamin West depicting the signing of this treaty.

I had seen this painting reproduced in history books a zillion times, but never seen the original. And there it was right in front of me! 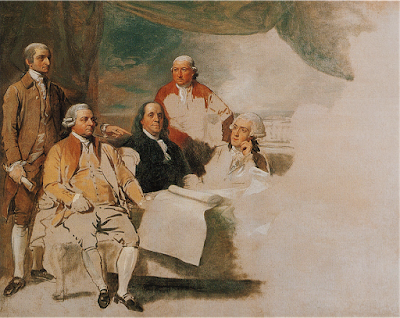 If you will notice, the right side, where British signer of this treaty would have been located, is blank. Apparently (according to artist David R. Wagner, who created a "completed" version of the scene), the British signer refused to pose for the picture.

Here is what Wagner says:

This depiction of the signing of the treaty between America and Great Britain by American Artist Benjamin West (1730-1820) was left unfinished because he could not get British Commissioner and member of Parliament David Hartley to sit for the painting. Hartley had posed for individual portraits before, and had actually signed the treaty, but refused to sit for this painting because he said he was "too ugly." In all probability he was commanded by his superiors not to pose, as this loss to the American Colonies was difficult to imagine and no artistic reminders were needed.

In any case, it was definitely the thrill of a lifetime to happen across the original painting and the historic document itself!

(Just glad I didn't spill any champagne on the latter.)

So let us lift our glasses (but not whilst leaning against anything that might contain priceless historical treasures) and sing "Happy Birthday, America!'

P.S. Yes, yes, I know. The 4th of July is the big "birthday" bash, but I think the date this treaty was signed should be celebrated, too.

So here you go: