I love stepping inside history!

We then moved past the captain into what was being called “the ballroom” that evening—although it was really just the large dining room at the back of the tavern. It did look particularly grand that evening. Many candles lit up the walls, covered with elegant gold-striped paper, and the tall windows, framed by ivory damask draperies, reflected their glow. Nearly all of the dining tables had been removed to make space for dancing, and the chairs moved to line the walls.

© 2016 by Dorothea Jensen, A Buss from Lafayette 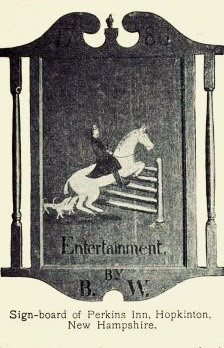 In this bit I was trying to picture the interior of the Perkins Tavern circa 1825, which burned down more than a century ago. Because of this I had to make up all the details in this description of the inn as set up for a dance I imagined that the Perkins Tavern was one of the more elegant inns in Hopkinton Village, NH, so that its public rooms might have been wallpapered. (I know that at least one home just a few doors down had wallpaper at that time.) I did, however, know what the Perkins Tavern (later called the Perkins Inn) sign post looked like, or so I thought.

From the town history, I was aware that there were at least three taverns in Hopkinton Village at the time of Lafayette's visit in 1825, two of which were the Perkins Tavern and the Wiggins Tavern, neither of which is still in existence. I had thought that the latter had burned down also. Recently, however, I learned that in 1927 a descendent of Benjamin Wiggins (the tavern's owner) had dismantled the building .He then transported it to Northampton, Massachusetts. There its interior was rebuilt as a restaurant attached to the Northampton Hotel. 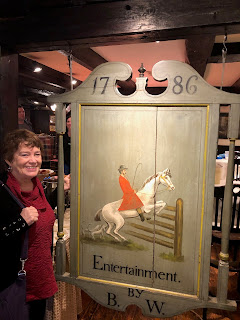 I was delighted when I realized that I now had the opportunity to walk inside a tavern built and operated in the same era as the Perkins Tavern. (The two were located on the opposite sides of the small town common in Hopkinto Village.

My husband and I made a point of stopping in Northampton and eating at the Wiggins Tavern. Imagine my surprise when the first thing I saw inside was this signboard reproduction. Look familiar?

Hmmm. My first inclination was to march over to the reception person and explain that they were displaying the wrong sign. Then I looked again at the inscription at the bottom: Entertainment by B. W. As in Benjamin Wiggins.


Then I realized at the date at the top of the sign: 1786, was repeated in this plaque: 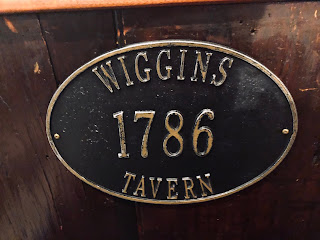 Deciding that this signboard belonged to Wiggins Tavern after all, I went further inside. I found many interesting antique implements, along with the original tavern fireplace: 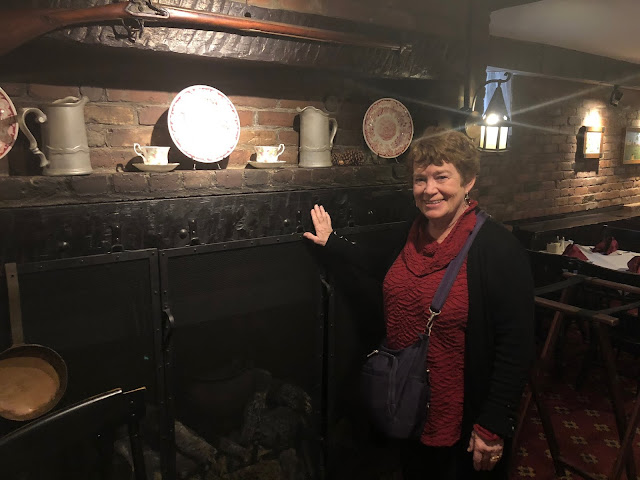 This was all very well, but still I had trouble picturing dances being held here, as was the case with other taverns of the time. Then I discovered another room: 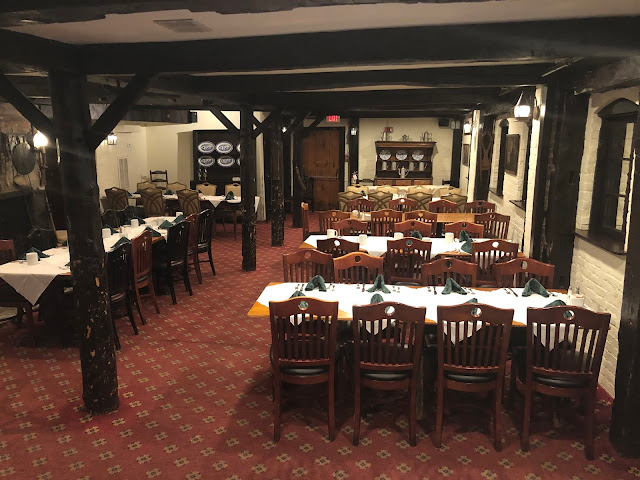 My first impression was that having uprights supporting the ceiling in the middle of a dance floor might be a hindrance to the festivities. After I thought about it, however, I realized that most dancing at that time was done in two lines: one for men and one for women, so the uprights would not be in the way. Like this (and please note the uprights right behind the men'a line): 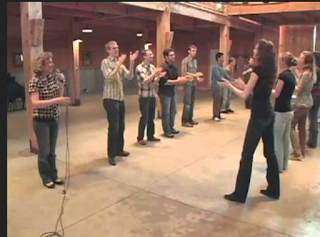 I suspect that a dance at Perkins Tavern in 1825 might have looked far more like these pix than the one I dreamed up in my head!

Anyway, it was a great pleasure stepping into the past at Wiggins Tavern. (The food was good, too!)