Ok. I admit it. I'm a huge fan of the television series based on Diana Gabaldon's Outlander novels. The acting is superb (particularly the two leads) and the story gripping.

In the season recently aired, however, the show's producers seem to have made a major error in the way they decided to dramatize the Regulators conflict in the Carolinas. When uniformed British troops showed up on the screen, my "suspension of disbelief" crumbled. As far as I can determine, there were NO BRITISH TROOPS involved in that conflict. Not any. All of the combatants of that struggle were American colonists: militias made up of colonists versus the Regulators, who were also colonists. Not a Redcoat to be seen.

Governor Tryon is portrayed as a powerful official sending in the Lobsterbacks. It is at least implied that the whole Regulator movement was a rebellion against this Crown-appointed governor's unjust laws and taxes.

Now, please remember that all laws in the British colonies in America were enacted by each colony's assembly. All taxes that had to be paid were also determined by the representatives from that colony sent to this legislature body. The governor himself could not impose any taxes.  Here's something I wrote more than thirty years ago about this.


The Americans and the British government had exactly opposite ideas about the role of these colonial assemblies, however. The King and Parliament regarded these local legislatures as only a practical, unofficial solution to the problem of governing the "plantations". The colonists, however, looked at their legislatures as something more than temporary measures to offset the inconveniences of distance. Among the leaders in the colonies (and in the assemblies) were many educated men who knew all about the rights of Englishmen. (They had read as much of John Locke’s stuff as any other Englishman of the time.) These colonial legislators (and the people they represented) thought of their assemblies as provincial parliaments with the same rights and responsibilities as the one in London starting with a capital P. And, just as the capital P Parliament held the pursestrings and controlled the actions of the King, the colonial assemblies held the pursestrings and effectively controlled their colony’s royal governor. Because of this, the royal governor generally had to act in ways the members of his colony’s assembly wanted him to, or they would not give him any money.
- The American Revolutions @ 1990 by Dorothea Jensen

It is my understanding that the Regulators conflict arose from the fact that :

2)  The officials collecting these taxes were corrupt.

So, why did the Redcoats showing up make me see red? I'll tell you why.

1) There was a strong tradition in Britain that no King should have a "standing army," in other words, a permanent army (as opposed to an army raised to fight in a particular war, then disbanded in peace time). A king without a permanent army of his own, needless to say, could not seriously oppose Parliament. Likewise, a royal colonial governor without a "standing army" could not seriously oppose the colonial assembly. Or impose his will on the colonists. Not even the colonists who were the Regulators.

2) It was the British government's sending troops to Boston (and closing the port)  as a punishment for the Boston Tea Party that started major revolt among the American colonists in Massachusetts. (Of course, there were also some left in New York after the French and Indian War ended, but that wasn't done as a punitive measure. Theoretically, they were troops left in place to help protect the outlying colonial settlements from possible further attack. There was no huge outcry at this, but people were not particularly happy to have the British soldiers around.)

So if there were red-uniformed British troops stationed in the Carolinas at the time of the Regulators conflict, I'm certain this would have been a major issue in itself, and not just a routine, "Oh, yeah, here come the many British soldiers stationed here in our colony" kind of thing.

But it was most upsetting to see this, as it muddies the whole issue of "taxation without representation." For if Governor Tryon truly imposed a tax and enforced it with British troops, the Revolution might have started then and there.  It didn't.

Having said that, I guess I'm going to have to find what Gabaldon actually wrote about Alamance, and if she specifies Redcoated troops fighting against the Regulators.  I'll let you know what I find. I write historical fiction myself, so I understand that plot pressure sometimes can mess about with the historical facts. (Although I do keep the history in my books as accurate as I can.)

I suspect, however, that the television version might have departed from her description just to make possible the dramatic moment when Jamie (sigh) is forced by circumstance to don the dreaded red uniform against which he had fought in the Uprising of 1745. 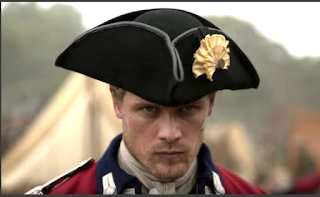 P.S. I just checked out Alamance in The Fiery Cross, and so far have found a letter written by Tryon expressing gratitude to the "officers and men of the army" for their support at Alamance. So it's apparently Diana who decided to bring in the Brits! Very disappointing.

P.S. 2 Anyone who can show that I am WRONG about all of this, please do let me know at jensendorothea@gmail.com.