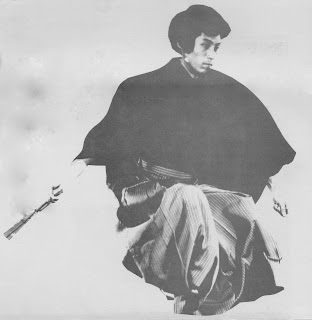 Here's a bit more of the original script and the final verse I wrote for the 1983 production of the experimental Noh play, "Hoichi" at the Walker Art center in Minneapolis, directed by
Akira Matsui (pictured above). 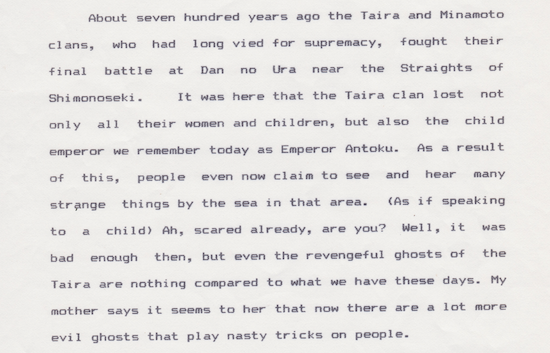 And my version (with some added background information for the American audience):

Seven centuries ago, at Dan no ura
Where tides flow back and forth between the seas
Shimonoséki Straits proved desperate
Dispiriting the mighty Heiké clan.
For many years, they’d battled with the Genji
And now, at last, the Heiké were at bay.
Upon that day they launched their dwindling fleet
With blood-red banners floating in the wind
And sailéd forth to meet their deadly foe.

The Genji forces, led by Yoshitsune
(Whose brooding brilliance brought his bitter fate)
Joined them in fiercest battle on the waves.
Until at last, those of the Heiké clan
Who managed to escape the savagery
Themselves chose death by leaping in the sea.
And so was lost each woman, man, and child
Who had ‘til then so haughtily held sway.
And chief among the tragic suicides:
The boy Antoku, infant emperor,
Who found his death amidst his scarlet flags
Adrift on fickle tides like fallen leaves.

And one final bit, spoken by the priest who decides to paint sutra verses all over Hoichi's body to protect him from the evil spirits of the Heiké.

This sacred sutra will be Hoichi’s shield.
To spirits now he’ll be invisible.
Each word inscribed will form a sacred link
Like lacquered segments of a warrior’s garb.
So thus with this impenetrable charm.
We’ll keep him safe from injury and harm.

Although, the kicker, as some of you might know, is that no one remembered to put verses on Hoichi's ears!

That's why the name of the folk tale, as re-told in English by Lafcadio Hearn, is "Hoichi No-Ears"!