As some of you know, my latest historical fiction for young readers, A Buss from Lafayette, details what General Lafayette did for our country during the American Revolution, when as a very young man, slender and six feet tall, and brimming with good humor and charm, he came to serve with General Washington.

My story is also about Lafayette's Farewell Tour of 1824-5, when he traveled around the U.S. attracting huge crowds and charming everyone he met. In A Buss from Lafayette, a key moment is when a young girl, Clara Hargraves, meets Lafayette, more than five decades her senior, at Brown's Brook, a small stream in Hopkinton, New Hampshire (where I live and where the story is set).

I just had a tiny taste of my fictional heroine Clara's experience. Without the crowds. And the Frenchman in question was slender, six feet tall, brimming with good humor and charm, and nearly five decades my junior.

Julien Icher is the Frenchman in question. A fellow member of the American Friends of Lafayette, Julien, funded by the French consul in Boston, is researching the route taken by the world-famous general through New England on his Farewell Tour. For a couple of days, I went with him. We had so much fun!


Julien and I at Brown's Brook, a place where Lafayette never made a stop
except fictionally in A Buss from Lafayette

The first day, we explored five towns which Lafayette did actually visit on June 27, 1825.

First of all, we met at the New Hampshire State House in Concord, where on June 22, 1825, Lafayette was welcomed inside by the State legislators and outside by over 200 Revolutionary War veterans and sat down to dine with over 600 people. (This was the event when a song composed for the occasion called New Hampshire the "Granite State" for the very first time.)  Julien had previously made a visit to the State House with the French Consul and been welcomed to the state by Governor Sununu, so we went on to view the house in Concord where Lafayette had spent the night. Owned at the time by William Kent, it was located at the site of the South Congregational Church on Pleasant Street. (Not only did Lafayette stay there in 1825, but Kent's stepdaughter married Ralph Waldo Emerson in the north parlor of the house.) It has since been moved to Spring Street. 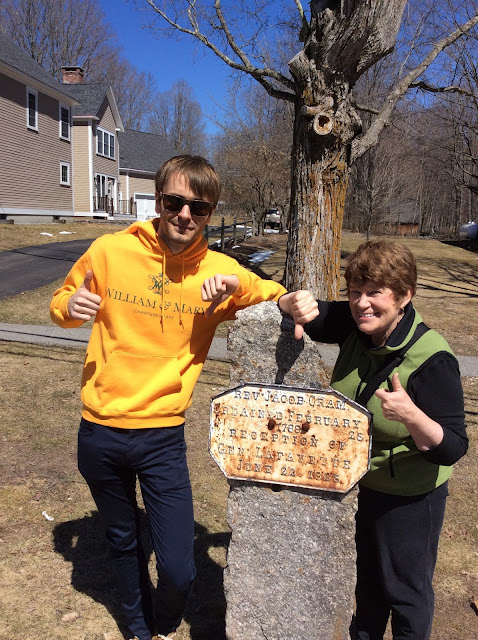 Next we picked up my husband and viewed the Lafayette marker in Hopkinton, where the general stopped for a brief reception on June 27, 1825. The date on this marker is incorrect, so Julien and I gave it both a thumbs up AND a thumbs down.