So thrilled to have Buss selling at a location mentioned in the story! 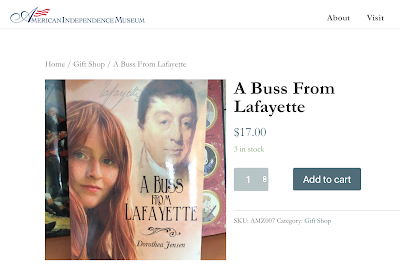 I am delighted to share this picture with you from the website of the American Independence Museum, in Exeter, New Hampshire, independencemuseum.org

It is a photo of one of the copies of A Buss from Lafayette they have in their gift shop.

Of course, it is wonderful to have my book for sale there because it is a museum about our fight for independence, but  it is also wonderful for another reason. The building that houses the American Independence Museum was the home of Nicholas Gilman, who is mentioned in A Buss from Lafayette.

In this short excerpt, Trueworthy Gilman, (an actual resident of Hopkinton, NH, where the story takes place) talks about his "kinsman", Nicholas Gilman,

One of the men asked if Gilman’s relative had witnessed the surrender at Yorktown.
“Aye. In fact, he was in charge of documenting the prisoners as they surrendered. This was a mighty big job, as there were well over eight thousand Lobsterbacks who laid down their weapons that day.”

And here is what I said about Trueworthy and Nicholas Gilman in the Afterword:

Trueworthy Gilman ran a store in Hopkinton. I do not know if he was actually related to
Captain Nicholas Gilman, Jr., who was in charge of tallying the British surrendering at Yorktown. As he shared a surname with Captain Gilman and had an interesting first name, however, I put him in my story. Captain Gilman’s home in Exeter, New Hampshire, is now a museum about the American Revolution called the American Independence Museum. Besides serving in the Revolutionary War, Captain Gilman was also a signer of the Constitution, and later served as a U.S. Senator.