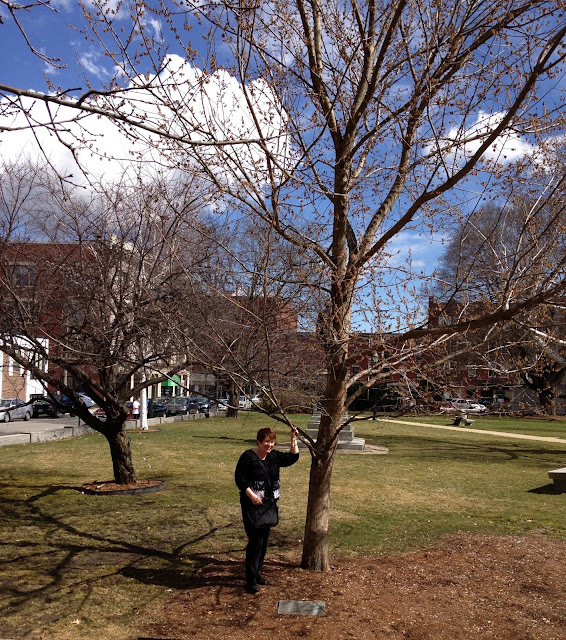 On May 19, 2010,  Comte Gilbert de Pusy Lafayette, sixth generation grandson of the famous Revolutionary War hero, General Lafayette, visited Concord, NH. He came here  to mark the 175th anniversary of his ancestor's visit to our state capital on June 22, 1825, during his "Farewell Tour" of America. On that occasion, General Lafayette visited the State House, greeted some 200 Revolutionary War veterans on the State House lawn, and sat down to an outdoor banquet with more than 600 guests.

I wrote about this  thrilling day in A Buss from Lafayette:

Major Weeks told us more about the Concord reception for Lafayette.
After the famous hero had visited the legislature, he came out of the Capitol
to find two hundred Revolutionary soldiers, assembled under the command of
General Benjamin Pierce, waiting to pay him their respects. After Pierce was
formally presented to Lafayette, he presented each individual veteran in
turn to the esteemed visitor.
“It was very affecting,” said the major. “All the veterans shed tears and
some of them sobbed aloud. Many had served under Lafayette at one time or
another during the Revolution. In fact, Lafayette remembered a number of them
by name!”
Father asked, “Were you able to speak to General Lafayette?”
“Yes, of course. In fact, later I had the honor of sitting right next to him at
the huge banquet on the State House grounds. Over six hundred people sat down to dine.”
And all for this one man, I thought. Then it struck me that this one man was a kind of living link with our nation’s history.  - A Buss from Lafayette © 2016 by Dorothea Jensen

I was crossing the State House grounds a couple of weeks ago, and I happened upon the tree pictured above.  It turns that this elm tree was planted in 2010 to replace the one planted in Lafayette's honor soon after his visit in 1825.


Kevin Landrigan wrote an article about this in Nashua Telegraph on June 13, 2010.
Here is the link to read what he wrote: Article About new Lafayette Liberty Elm.

(Of course, I had a particular warm spot for the events of the day when Lafayette's descendant visited Concord, as that was when Alan Hoffman, President of the American Friends of Lafayatte, asked the Comte a question for me about the Lafayette family tree.)

I took a picture of the plaque on the ground beside the tree, but it was too hard to read for me to place it in this post.  Here is what it says:


AMERICAN LIBERTY ELM
Named for the Liberty Tree, a symbol of Freedom to the
Sons of Liberty, and cut down by the British Redcoats in 1775.

"The world should never forget the spot where once
stood the Liberty Tree, so famous in your annals."